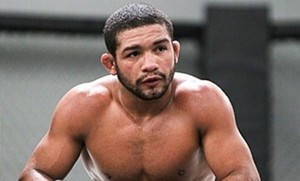 The UFC will close out 2013 with UFC 168 and 2 more bouts have been announced with a Featherweight contest pitting TUF 14 winner Diego Brandoa (18- 8) against Dustin “The Diamond” Poirier (14-3) and fireworks are expected when Middleweights Chris “The Crippler Leben (22-10) and Uriha Hall (7-4) clash.

American Top Teams Poirier has alternated win and losses in his last 4 contests being submitted by Chan Sung Jung, submitting Jonathon Brookins, losing the score cards against Cub Swanson, and is now coming off a unanimous decision win over Erik Koch at UFC 164.

Leben a alum of the 1st season of TUF since the biggest win of his career at UFC 132 knocking out Wanderlie Silva, has lost 3 fights in a row and been suspended for a failed drug test. The 3 losses have come to Mark Munoz (KO), Derek Brunson (UD), and Andrew Criag (UD).

Hall a finalist of the 17th season of The Ultimate Fighter lost the finals by split decision to Kelvin Gastulem. Hall would again be on the losing side of a split decision at UFC Fight Night 26, falling to John Howard.