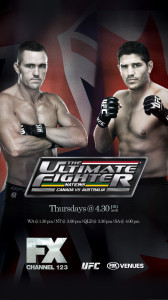 The TUF Nations Finale main event will feature fighters from different nations but not from either of the nations that competed in this season as American Tim Kennedy (17-4) face England’s Michael “The Count Bisping (24-5).

It’s tradition that after a long while of taping The Ultimate Fighter and being at each others throats that the 2 coaches fight and for TUF Nations, Australia’s Kyle Noke (20-6-1) and Canada’s Patrick “The Predator” Cote (19-8) will battle at the TUF Nations Finale.

Bisping has not competed since bouncing back form a knockout loss to vitor Belfort, with a decision win over Alan Belcher; at UFC 159 in April of 2013.

In the main event of UFC Fight for the Troops 3 Kennedy extended his current win streak to 3 with a 1st round knockout of Rafael Natal.

Noke has not fought since a UFC 152 TKO victory over Charlie Brenneman, in Noke’s Welterweight debut.

Cote has won 6 of his last 7 fight including a Welterweight debut unanimous decision over Bobby Voelker at UFC 158.

Dunham will be looking to rebound from back to back losses to Rafael dos Anjos (UD) and Donald Cerrone (SUB).

Bocek who is 2-1 in his last 3 fights is coming off a decision loss to Rafael dos Anjos.

Stout who is 5-3 in his last 8 fights is coming off a UFC on Fox 9 decision victory over Cody McKenzie.

Noons at UFC 166 won by way of decision over George Sotiropoulos to snap a 3 fight skid.

Gagnon is coming off back to back submission wins of Walel Watson and Dustin Kimura.