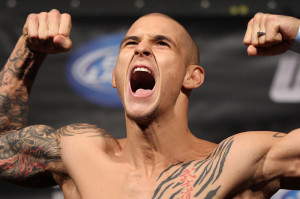 The newest bout added to the TUF Nations Finale is in the Featherweight division pitting Dustin “The Diamond” Poirier (15-3) against Akira Corassani (12-3).

Poirier is a top 5 Featherweight who has won consecutive bouts over Erik Koch (UD) and Diego Brandao (KO). “The Diamond” has 12 wins by stoppage with 6 submissions and 6 (T)KO.

Corassani is on a 3 fight win streak having defeated Andy Ogle (SD), Robbie Peralta (UD), and Maximo Blanco (DQ). Corassani has 7 of 12 wins by decision.