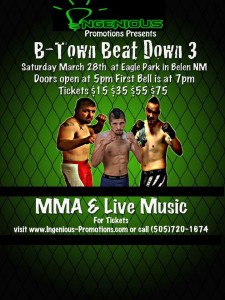 On the scene at Eagle Park in Belen, New Mexico for B-Town Beat Down. A 8 bout MMA card and concert, topped off by Manuel “Mano” Otero vs. Randy McCarty, presented by Ingenious Promotions.

The event had a few glitches, but once the lights drop the hot evening got set on fire by the crazy non-stop action in the cage.

R1- Bell rings they they take to the middle and bombs away. Perez score a knock down with a short right following Yazzie to the ground Perez falls right into a triangle choke. Perez escapes, Yazzie scrambles to his all fours. Perez spins aropund takes the back hunting fro the choke. Yazzie spins into Perez guard as the 1st round ends.

R2- Yazzie throwing hard rights. Perez shoots in for the take-down and Perez ends up on his back. Yazzie left arm is around the head of Perez holding Perez left arm. Perez gets his hands free. Yazzie raining hand punches and the ref steps in.

R1- both men are widely swinging away. Jacobs connects with a hard front kick. Spikes score a take-down. Jacobs back to his feet attacking with a guillotine. Spikes with a 2nd take-down. They scramble and are back to the feet. Jacobs shoots in eats a knee. Spikes eats a left and then scores a take-down. Jacobs scrambles and \Spikes has the back as the round ends.

R2-  Jacobs throws a front kick Spikes tackles Jacobs. Jacobs stands deflects 3 punches. Spikes shoots on a take-down and Jacobs sprawls and takes the back. Jacobs working sum ground and pound as they fight for wrist control.  Jacobs spins to the front looking for a choke can’t find it and is back to the back. Spikes stands and is pulled back down by Jacobs. Jacobs is in mount and Spikes is going for a kimura as the round ends.

R3- Spike pressure Jacobs to the cage with punches. Jacobs circles. Spikes slips off an un-balanced kick Jacobs takes the back and sinks in the RNC for the tap.

Recap- R1 Otero out the gate puts George on the fence and is wing away with big right hand bombs. George attacking Otero’s left with low kicks.  Otero breathing heavy then fires a straight right hand that knocks down George. Otero with ground and pound from side control get the stoppage.

R1- Lamb 1st to land with a right hook. Cota circling while Lamb controls the center of the cage. Cota fires a leg kick Lamb returns with 2. Lamb connecting with hooks pressure Cota back to the cage. Cota clinches and puts Lamb on the cage, Lamb off the cage scores a take-down off an inside trip ending the round in guard.

R2- Cota lands a pair of leg kicks to open the round. Lamb of balance on a kick slips Cota jumps on Lamb who scrambles to the top an into Cota’s guard. Lamb using a cross-face is trying to make Cota make a move on the ground. Cota from the bottom is holding the body triangle trying to get stood up. Lamb with peppering shots to the body from the guard. Cota goes for a triangle choke at the bell.

R3- Pair of low leg kicks from Cota. Lamb back Cota to the cage lands a straight to the body. Cota with the clinch puts Lamb on the fence Lamb from the clinch scores a take-down with inside trip to the guard. Cota locks up a body triangle and then transitions to the triangle choke. Lamb escapes, Cota take top position and slides into mount where the fight ends as the final bell rings.

R1- Tafoya lands a clean hooks kick and right hand. Benavidez firing punches, Taoya scores a trip puts the fight on the ground and lighting quick takes the back sinks in the choke for the win.

R1- Morales lands a right low kick. Mitchell clinches, Morales goes for a guillotine. Morales lets go of it as they hit the ground and scramble. Back on the feet Mitchell clinches Morales jumps on guillotine. Morales works his way to the back. Mithcell works Morales off the back and takes top position being in the guard of Morales’s. With a kimura Morales sweeps, takes the back and there when the rounds ends.

R2- Morales misses with a spinning heal kick. Mitchell flicks out his jab. Both miss over hand rights. Morales connects with a left low kick. Morales spins into a Mitchell clinch. Mitchell scores a take-down from body lock. Morales works back to his feet. They exchange hard leg kick. Michell in on a scores a take-down with a double leg. Mithcell slides to mount as the round ends.

R3- Morales stuns Mitchell with a straight left. Morales follows with 5 knees that get somewhat blocked. Mitchell circles away and comes back in with a 5 punch combination. Morales clinches moves to a headlock fires knees. Mithcell drops to his knees almost has the back but gives up his own. Mithcell slides out from under Morales and back to his feet. Morales lands a hard leg kick. Mitchell lands a big left hook and shoots in scoring a double leg take-down to end the round.

R1-Perez rushes out the corner knocks down Salazar  with a punch that landed  from a  5 punch combination. and opens up viscous ground and pound from side control for the stoppage. All Salazar could do was try to cover up.

R1- McCarty comes out jabbing. Otero fakes a kick. 3 punches an a kick from McCarty. Otero slips on a kick. Otero in on a single leg works back to his feet. Otero puts McCarty on the cage hunting for the take-down. Otero gives on the single leg moves to one over hook with right arm fight wrist with his left. Otero has a body lock.McCarty with a judo throw scores the take-down. McCarty takes Otero’s  back.  Otero escapes and in a scramble takes McCarty’s back. Otero has both hooks in and is hunting for the choke. McCarty scrambles on to his back. Otero is in half guard as the round ends.

R2- McCarty working his low kicks. Otero wobbles to the cage after eating straight left. Right hand to the body lands for Otero. 2 3 punch blitz’s from McCarty score. Otero looking gun shy. McCarty keeping up with pressure. Otero with a leg kick. McCarty blitz’s 3 punches ends with a body kick. Left to the body from McCarty. Right to the body lands from Otero. 2 to 3 punches and ending the combination with either a inside leg kick or right body kick, McCarty stayed the busier fighter through the round.

R3- Jab from McCarty, they clinch McCarty lands a knee, they break, they clinch and break again.  Otero comes forward throws pair of kick finds air. Otero lands a low kick, they clinch McCarty scores the take-down. Otero back to his feet clinches, puts McCarty on the fence and then lands a knee south of the border. Time in McCarty jabbing and following with inside leg kicks. Otero lands a push kick, they clinch, Otero blocks a trip attempt. Otero in on a guillotine, pulls guard. McCarty escapes, Otero sweeps back to top position. McCarty trying to sweep Otero holding top control and starts to fire elbow in the last 10 seconds.