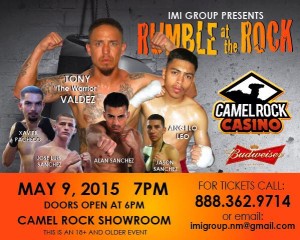 Saturday May 9th, Camel Rock Casino, IMI Group in their debut event presents “Rumble at the Rock”. To night 5 bout boxing card is headlined by Espanola, New Mexioc’s Tony “The Warrior” Valdez taking on Gilberto Mendoza who hails from Baja California, Mexico, and fights out of Modesto, California.

The card also features undefeated fighters Angelo Leo and Jason Sanchez. Jason is joined on the card by his brother Jose Luis Sanchez who’s lone loss comes from WBC champion Josh “Pitbull” Torres. This event is also in tribute to the memory of Alan Sanchez the brother of Jason and Jose Luis, who recently tragically passed away in an automobile accident.

Canceled due to Spencer coming in 14 lbs. overweight

Canceled due to Palaez not having his blood work in

Due to not having an ambulance on sight and a fighter without blood work, Rumble at the Rock started over and hour late. Ring announcer for the Event Dennis Chavez did a wonderful job of keeping the crowd entertained during the delay. By fight time the venue was 90% full and the promotion said the event was a sellout.

To start the event off WBC champion Josh “Pitbull” Torres was honored. Alan Sanchez was given a moment of silence and a 10 bell salute and his father Peppy Sanchez said a few words. 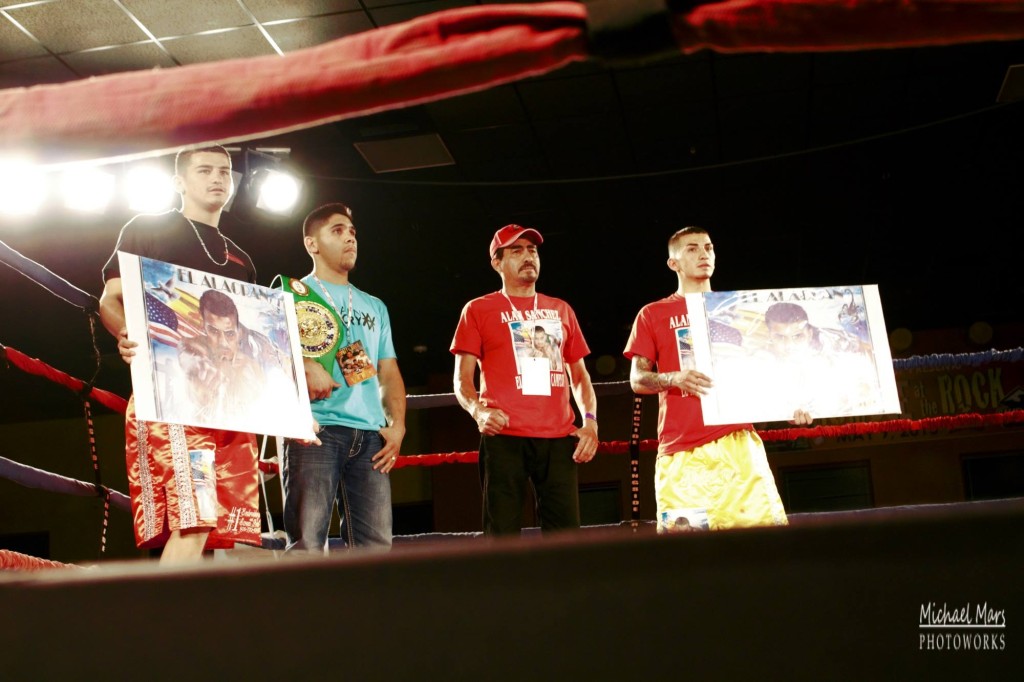 R1- Peterson came out strong on pumping his jab, but as the round went on Sanchez found success with the ending punches of his combinations;  landing a pair of hard left hooks and a big inside uppercut Sanchez had control of the fight.

R2- Sanchez found success with the straight right following with the left hook. Peterson got stuck on ropes and has a bloody nose.

R3- Peterson coming forward hard then eats a double jab follow by a straight right. Sanchez having Peterson on the ropes rips 3 left hooks to the liver scoring our first knockdown. Sanchez went hard for the finish. And when it didn’t come his pace slowed in the later of the round.

R4- The pace slow greatly in the final frame Peterson landed one big left hook but missed with the majority of his punches. Sanchez kept his jab in Peterson’s face, then ripped to the body and ended the fight with a flurry of hooks. 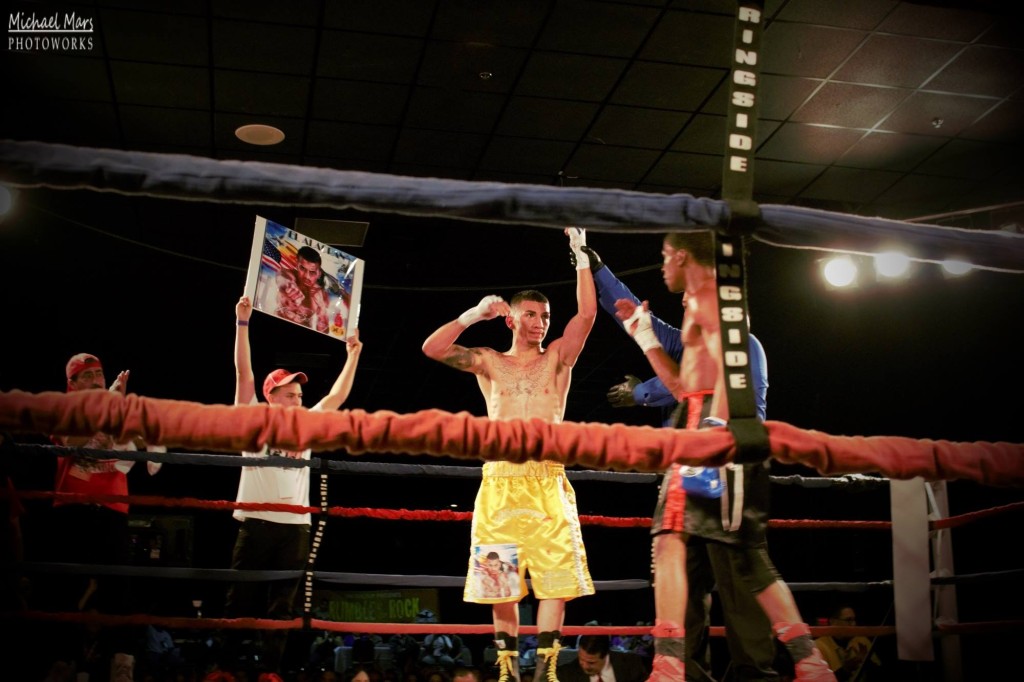 R1- Pacheco gave Wood a steady diet of jabs and mixed in occasional follow up rights. Pacheco mixed in going to the body as the round went on. Wood landed a stiff short left and one overhand right in the round.

R2- light on his feet Pacheco stays active with the jab now looking for follow up hooks both sides body and head. Pacheco over aggressive eats tow lefts. I see wood is bleeding from his mouth from the jabs,

R3- Pacheco keeping the jab going. Wood is now answering back wing heavy hooks. Pacheco occasionally hitting to the body missing his levels so well that his body punches are all landing . wood is throwing but not mixing up his punches. Wood is letting Pacheco lead the dance.

R4- Pacheco still jabbing. Wood with his best counter snaps Pacheco’s head back with an uppercut. Pacheco jab follow hook and wood is on the move. Pacheco first overhand right lands to the ear and woods is on the ropes 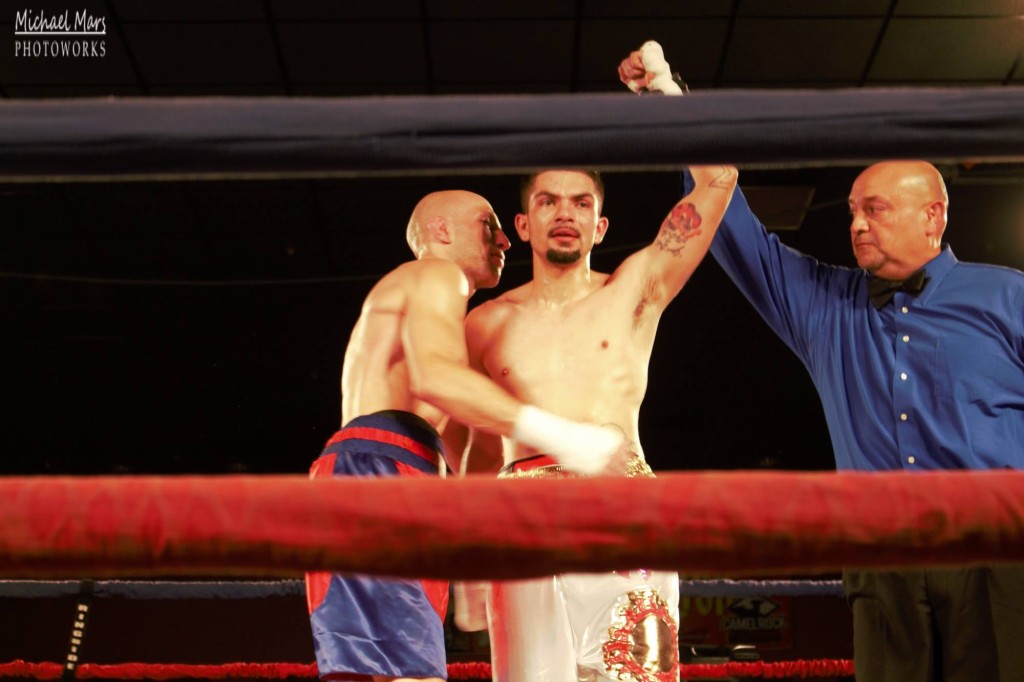 R1 – Both men come out jabbing. Leo then went to the body ripping 4 hooks. Leo then went 1-2 uppercut. Leo score a knockdown with a left hook to the liver. Braxton started to throw over hand right off his jab by the end of the round.

R1- Mendoza trying to find a home for the jab. Valdez blasting hook landing 6 clean left hooks in the round. Then Valdez started to work in the jab. Mendoza from a collision of heads is cut Above his right eye.

R2- Mendoza up his pace throwing double as many punch. Valdez slowed on his out put but was very accurate with what he did throw. Both men had punches stay low.

R3- A Mendoza right staggers Valdez who reigns his balance and answers with a big left hook. The right hands and movement of Mendoza looks to be troubling Valdez who pushed forward and end the round with a few hooks

R4- Mendoza lands 3 punches one hook from Valdez and Mendoza back off . Valdez hands are dropping Mendoza lands his jab and a left hook Valdez lands a pair to the body then eats 3 rights. Valdez ends the round with 5 punches to the body.

R5- A jabbing battle is halted by a Mendoza left hook. Valdez working the jab and getting to the body. Mendoza finding a home for his follow up left hook. Valdez is scoring with over hand counters we have a close hard fought war heading to the final round.

R6- In close we have a fire fight both men landing, staggering and firing right back. Matching left hooks are flying from both parties. Thew cheering tony. Mendoza lands with 6 punches dodges the counters. Valdez now coming forward hard lands 8 punches to end the bout. 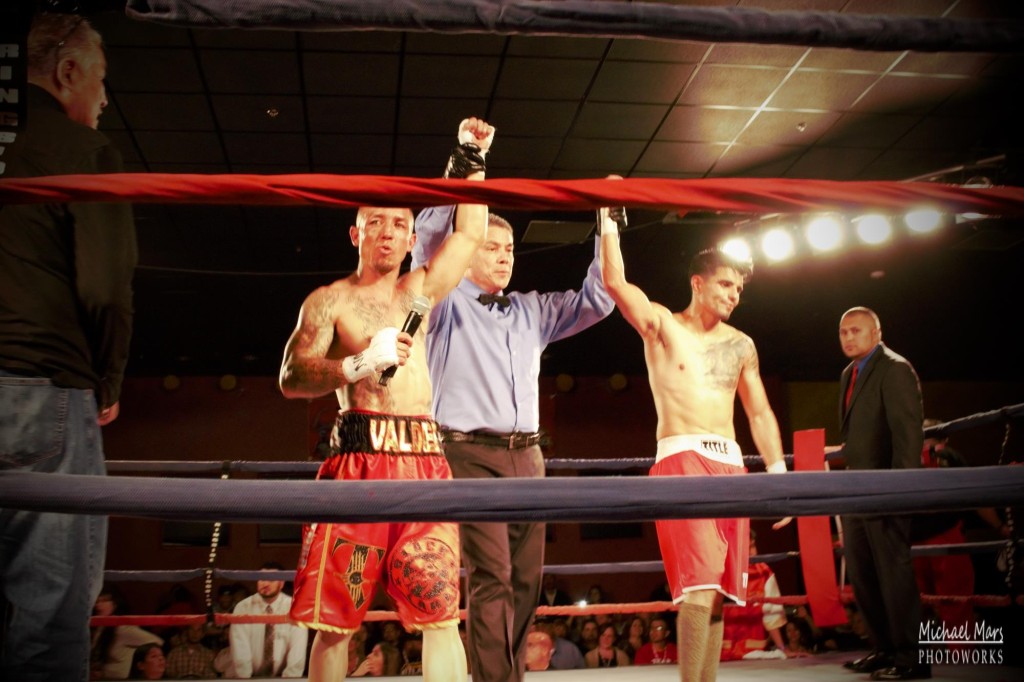 Photos from the event will be posted soon along with post fight interviews.

IMI Group made a few mistakes during their debut event. But the show must go on, and the problems were fixed; most of all the action in the ring lived up to the price of admission.

Fight of the Night: Tony Valdez vs Gilberto Mendoza 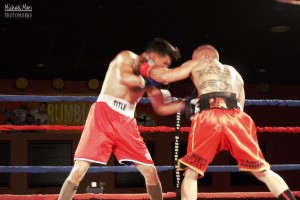 Fighter of the Night: Angelo Leo