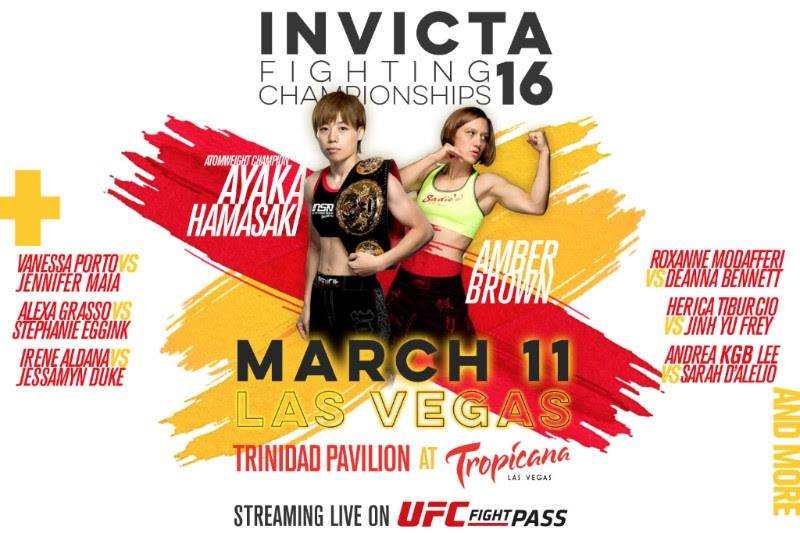 Officially Inivcta FC will be back on Fight Pass March 11th with Invicta FC 16 taking place at the Trinidad Pavilion at Tropicana in Las Vegas. The event will feature 2 title bout with the main event having New Mexico WildBunch member Amber “The Bully” Brown challenging Japan’s Ayaka Hamasaki for the Invicta Atomweight title.

Brown who has spent her whole combat sports career training at Fit NHB, is undefeated at 105 lbs. Currently “The Bully” is on a 4 fight win streak, 3-0 in Invicta, and is coming off back to back ultra impressive submission victories of Catherine Costigan (RNC) and Shino VanHoose (Guillotine Choke). Brown has proven to have power in her hands, great control in the clinch, and is a finisher on the ground; whether we’re talking about ground and pound or submission. Hamasaki, heads into her first title defense, after having dethroned Herica Tiburcio at Invicta FC 13 via split decision. The win was Hamaski’s 3rd straight. Hamasaki by 6 years is Brown’s elder and has been a pro for 3 years more. Hamasaki has fought to the final bell in 50 % of her wins and has 4 of her 6 stoppage wins by submission.

The nights co-main event is also a title affair with Brazilian’s Vanessa Porto & Jennifer Maia battling to become interim Invicta FC Flyweight champion. Both fighters have won 3 straight. Porto is coming off a Invicta FC 12 unanimous decision win over Roxanne Modafferi, while Maia has won 3 straight outside the promotion, with a pair of knock out wins.

The rest of the card is below with a match-up of an undefeated prospect against a former XFC champion. Also the card will see UFC vets, a former Legacy FC champion, a former Invicta FC champion, and 3 fighter making their pro debuts.