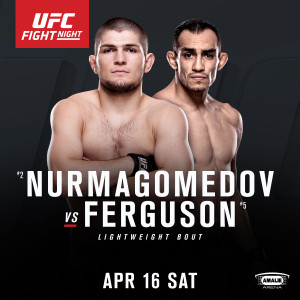 Taking place at the Amalie arena in Tampa, Florida, will be the next UFC Fight Night on big Fox. The main event of UFC on Fox 19, April 16th, will see a battle between number 2 ranked contender Khabib “The Eagle” Nurmagomedov (22-0) & number 5 ranked contender Tony “El Cucuy” Ferguson (20-3).

Due to injury Nurmagomendov had not fought since April of 2014, but is 6-0 in the UFC and is the last person to defeat current UFC lightweight champion Rafael dos Anjos. Ferguson the season 13 winner of TUF, has won 7 straight coming off submitting Edson Barboza.

In a battle between former Light Heavyweight champion “Suga” Rashad Evans (19-4-1) meets Mauricio “Shogun” Rua (23-10). Evans has won 2 of his last 3 but will be looking to rebound from a unanimous decision loss to Ryan Bader. Rua on the other hand has lost 2 of hist last 3, but is coming off a unanimous decision win over Antonio Rogerio Nogueira.

In a rematch of bout from UFC 157, back in June of 2013, Dan Henderson (31-14) and Lyoto Machida (22-7) will face off against, this time at 185 lbs. Their first bout went all 3 rounds and saw Henderson take the split decision win. Henderson is one bout removed from knocking out Tim Boetsch in under 3o seconds; but is looking to reound from a knock out loss to Vitor Belfort.

The main card will also see a rematch in the woman’s strawweight division with Rose Namajunas (4-2) looking to avenge a July 2013 unanimous decision loss to Tecia Torres (7-0). Torres in 2015 defeated both Jocelyn Jones-Lybarge and Angela Hill via unanimous decision. Namajunas went 2-0 in 2015 submitting Angela Hill and Paige VanZant.