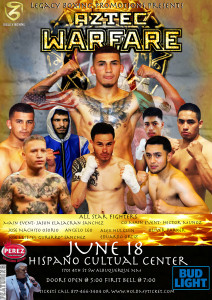 Legacy Promotions has moved Aztec Warfare back a week to June 18th still at the Hispanic culture Center with Jason Sanchez against Raymond Chacon as the main event.

Jason Sanchez has 3 win by technical knockout, including his most recent pair of wins over Damen Wood and John Herrera. Chacon a vet of 24 pro fights has dropped back decisions to Jose Haro and Joshua Greer Jr., but in his last trip to the 505, Chacon scored a split decision win over Tony Valdez.

Alex Holguin will be bringing a 6 fight win streak into his bout with Martin Solis, who’s coming off a TKO of Joe Trevino.