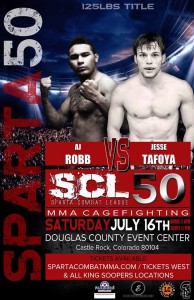 Eleven fights into his amateur run, you had to know that Jesse Tafoya wasn’t going to turn pro before at least competing for one championship and thanks to Sparta Combat League, that opportunity will present itself on July 16th.

Jesse Tafoya will be heading north to Colorado to challenge AJ Robb for the SCL amateur Flyweight title at SCL 50.

Tafoya (8-3), trains at the JacksonWink Academy and is an instructor at Winks Gym in Northeast Albuquerque. Tafoya has bounced back an forth between Bantamweight an Flyweight, taking fights wherever he can find them. Tafoya is constantly working to improve his striking, as all 8 of his victories have come via submission.

Robb (6-1), fights out of Colorado Springs, Colorado, and has 5 of 6 wins via knock out, including a Jackson’s MMA Series XIII, 1st round win over Ricky Esquibel. Robb’s lone loss come via decision to Billy Brand. Robb has since rebounded with a 2nd round stoppage of Dylan Stubblefield.