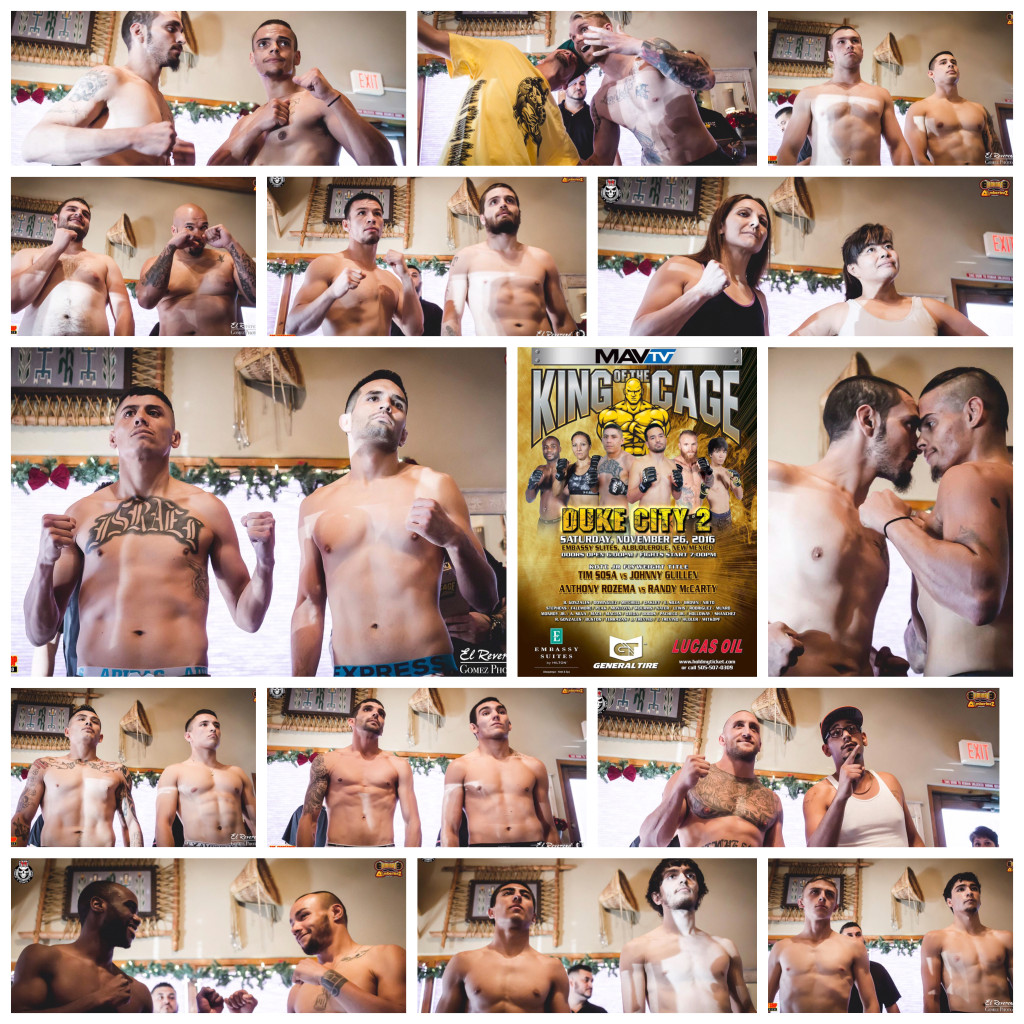 The Embassy Suites & Spa in Albuquerque, NM is playing host to the 13 fight pro/am card that being presented by King of the Cage tonight, Duke City 2; headlined by Johnny Guillen & Tim Sosa battling for the KOTC Jr. Flyweight World Title.

Recap- Ortiz pressed forward with big hooks, get taken down, Ortiz stands escapes a Kimura, Munro on his back throws up, locks in, an forces the tap with a armbar

Recap- Oakley right body kick, Wourms left hook, Oakley goes down on his back an Wourms follows they play the leg lock game, Wourms mounts, Oakley gives back Wourms sinks in choke for the tap.

Recap- Mitchell with 2 take downs didn’t get much done. Jones take down stuck in guillotine escapes and punches. Rd 2 Jones get the thia clinch knees and elbow Mitchell till the ref jumps in.

Recap- Hudler bulls on into the colic clinch with double underhooks. Hudler big throw moves to mount ground and pound to finish.

Recap- Pacheco Jr. With a quick take down move to mount had the back, Peak escapes one RNC attempt, Pacheco ends rd 1 in mount. Peak hard right low kick followed by right hand. Pacheco Jr.  take down to half guard. Peak stands fires a hard jab cross, Pacheco Jr. take down. Peak throws up a triangle. Pacheco escapes, mounts  and is there when R2 ends. Pacheco Jr. Shoots right into a arm on guillotine escapes into half guard.  Scramble an Then end up with Pacheco Jr. back in half guard.

Recap- Brown clinches to a body lock after a minor position battle Brown gets the take down in to full guard, but in transition to mount it swept. Holloway backs away. Brown with one more take down before the bell. Winging push kicks and trap kicks Brown get Holloway to the clinch against the cage.  Right hook, Right knee to the chin, right uppercuts Brown with the take down to mount. Holloway in on a take down and stuffed. Brown scores with the step in left hook, followed by the this clinch and several knees. Holloway reversed on a take down. Brown  on top in half guard.

Recap- Gonzales circling popping her jab. Gonzales left body kick right leg kick. Gonzalez stiffs the take down attempt circles away and then comes back with fire. Gonzales right uppercut, right over hand and the knees an rights till the ref jumps in.

Recap- Hard leg kick from Rozema an he stuffs the take down, right hand down goes McCaryty. 1st Rd Knock out.

Recap- Guillien popping his jab, Sosa working the leg kicks.  Sosa ducks a jab gets the double leg takedown even with the Guillien cage grab. Guillien up and back down. Guillien throws his legs up, an armbar and Sosa escapes. Few elbows from Sosa Guillien back to his feet  a take down of his own and take Sosa’s back. Sosa stands turns around and take Guillien back down where Sosa is at the end of rd 1. Sosa with a leg kick, grabs this clinch and knees while Guillien punches to the body. Both men going out side with the leg kicks. Sosa take down to half guard. Guillien with a overhand right, body punches, and a leg kick had found his range in the 3rd.  With a level change Sosa shoots in get the take downan advances to mount. Guillien works back to his feet. Guillien end the rd with a Fred jabs, Guillien could have won his first rd on the scorecards. Guillien throwing in volume finding air. Sosa staying on his leg kicks. Action gets stopped breathy to check Guillien’s eye. They clinch Guillien looking for his right Sosa with elbows and knees. Guillien coming up shirt on his punches. Guillien coming forward Sosa with the reactive take down. Guillien back to his feet and can’t complete his take down. 5 Rds we go to the judges.