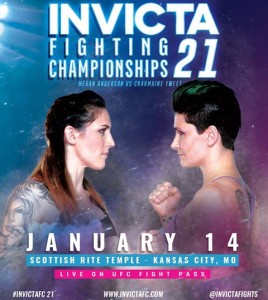 The card for January’s Inivcta FC 21 is starting to take shape with today’s announcement of 4 new fights added to the card including JacksonWink Fighter Jodie Esquibel against DeAnna Bennett.

Esquibel will be looking to rebound from an eventful 2016 where she was robbed of a decision on The Ultimate Fighter reality show and lost a decision to to Alexa Grasso in the main event of Invicta FC 18. Bennett has won 4 of 6 fights in Invicta, but is coming off consecutive losses to Livia Souza (tko) and Roxanne Modafferi (sd).

Also at Bantamweight undefeated Aspen Ladd, who’s has 3 of her 4 wins by TKO, takes on Sijara Eubanks, who at Invicta FC 18, scored a 1st round TKO of Amberlynn Orr.

Last but not least in the Flyweight division former professional Boxer heather Hardy (18-0, 4 KO’s in Boxing) makes her pro MMA debut against Brieta “Tank Girl” Carpenter, who as an amateur went 8-2, with 5 knock outs and won a title in the Tuff-N-Uff promotion.