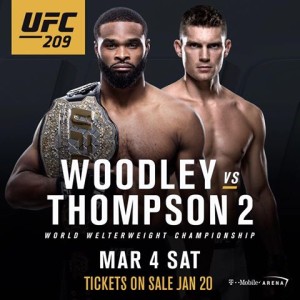 March’s UFC 209 will see a Welterweight title fight with Stephen “Wonderboy” Thompson and Tyron “The Choosen One” Woodley continuing where there UFC 205 5-round war left off.

Back in November after 25-minutes of action the judges decision was read as a majority draw. The scores read as (48-47 Woodley, 47-47 Draw, and 47-47 draw). The oddity in the scoring is that both cards that scored the fight a draw gave Woodley a 10-8 dominate scoring round, Doug Crosby scoring the 1st 10-8 Woodley and Derek Cleary scoring the 4th a 10-8, but both gave Thompson a 10-9 in the 3rd unlike Glen Trowbridge.

It was Woodley on his T-Wood podcast that announced the rematch was official. Prior to the draw Woodley was on a 3 fight win streak, defeating Dong Hyun Kim (tko), Kelvin Gastelum (sd), and Robbie Lawler (ko). Thompson has won 7 straight with knock outs of Chris Clements, Robert Whitakker, Jake Ellenberger, and fromer champion Johny Hendricks.