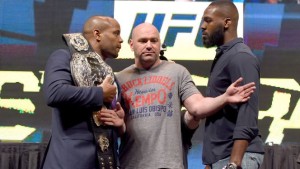 At the UFC Summer Press Conference, it was made official that Daniel Cormier will be defending his UFC Light Heavyweight title against Jon Jones at UFC 214.

These two are two of the most heated rivals in the UFC’s history. They first met at UFC 182 with Jon Jones winning at unanimous decision. They have since continued a war of words and have had the sequel fail to happen twice, at UFC 197 due to a Cormier injury, and again at UFC 200 due to a USADA violation.

Since the loss to Jones Cormier has twice submitted Anthony Johnson and took decisions from Alexander Gustafsson and Anderson Silva. Due to the USADA violation, Jones last fought at UFC 197 in April of 2016, taking a unanimous decision win over Ovince St. Preux.

UFC 214 is July 29, at the Staples Center in Los Angeles, California.