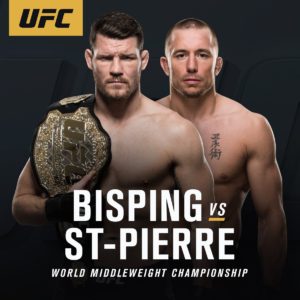 The UFC makes it’s 2nd stop at Madison Square Garden on November 4. The card currently has 7 fights and 2 championship contests.

The main event will see the return of George “Rush” St. Pierre, wildly regarded as the greatest Welterweight of all time, moving up to challenge Michael “The Count” Bisping for the UFC Middleweight title.