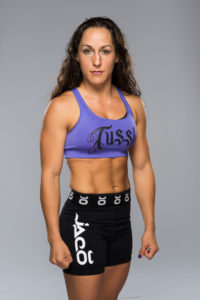 When one door closes another one opens. That is just the case for, Jodie Esquibel a long time member of JacksonWink MMA , who was unable to fight as last weeks Invicta FC 25, but has now gotten the call she’s been waiting for.

Esquibel (6-2) has gotten the UFC cal and her promotional debut debut will come in the co-main event of UFC Fight Night 118, against former title challenger Karolina Kowalkiewicz (10-2). UFC Fight night 118 in October 21st, in Gdansk, Poland, at the Ergo Arena.

Esquibel was so close to being on TUF season 23, but lost a controversial decision to Ashley Yoder, in a exhibition bout to get into the house. Esquibel also a pro boxer, showed off her striking parlous in her most recent decision win over current TUF 26 cast member DeAnna Bennett.

Polanish fighter Karolina Kowalkiewicz is the number 2 ranked women’s starwweight contender. Kowalkiewicz started her pro run off with 10 straight wins including going 3-0 in the UFC. This led to a title shot at UFC 205. After 5 rounds Joanna Jedrzejczk was still champion. In June the Polish striker, was finished for the first time as a pro, being submitted by Claudia Gadelha.

Keep up with cagedminds.com on social media