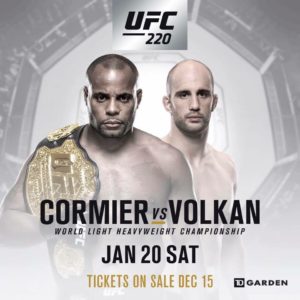 When the UFC returns to Boston on January 20th, it will do so with the Light Heavyweight Title on the line, as Volkan Oezdemir challenges Daniel Cormier.

Cormier is on a 4 fight win streak, since his UFC 214 loss to Jon Jones was over turned after a failed PED test was announced. In his last 4 official fights Cormier has twice submitted Anthony Johnson and took decision wins over Anderson Silva & Alexander Gustafsson. Cormier will be attempting to defend the title for the 4th time.

Oezdemir the number 2 ranked contender in the division was most recently in the news for the wrong reasons, having been arrested November 18th, for involvement in a brawl outside a Florida Bar. Inside the octagon Oezdemir is 3-0 with 1st round knock outs of Jimi Manuwa & Misha Cirknov, following a debut decision win over Ovince Staint Preux.