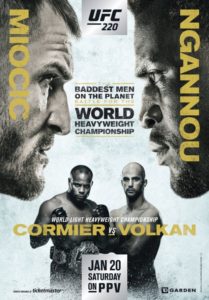 In the main event number 1 contender Francis Ngannou (11-1) challenges Stipe Miocic (17-2) for the UFC Heavyweight title. Ngabbou rides a 10 fight win streak, with a 6-0 record inside the octagon. The Cameroon born fighter has all his wins by stoppage 7 knock outs and 4 submissions. Miocic has won 5 straight all by knock out and has 13 knock outs total. The last 2 wins have been successful title defenses, a win over Ngannou and Miocic has the most title defenses in UFC history.

In the co-main event number 2 ranked contender Volkan Oezdemir (15-1) challenges Daniel Cormier (19-1) for the UFC Light Heavyweight title. Thanks to a Jon Jones USADA violation, UFC 214 effectively never happened, and Daniel Cormier is on a 3 fight win streak. The former Olympic wrestler has 12 stoppage wins, with 8 by knock out. Oezdemir has won 5 in a row and is 3-0 in the UFC. Oezdemir has won his last 2 by knock out, in a combined 70 seconds. The Switz fighter has 11 of 12 finishes by knock out.