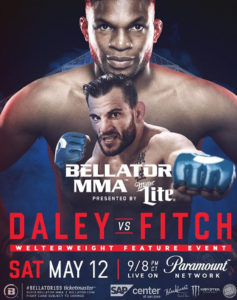 Fitch (30-7-1, 1nc) has won 4 straight. Back in June at PFL: Daytona, the 40 year old, with a rear naked choke of Brian Foster scored his 6th career submission victory. Fitch a legendary grinder has show much growth in his striking since trading with One Kick Nicks gym in Las Vegas.

Daley (40-15-2) is 7-2 in is his last 9, but 2-2 in his last 4. The 35 year ole from Nottingham, England, has 30 knockout wins, including his last win in September over Lorenz Larkin. Daley has power I both hands, his signature punch is his left hook, and he packs a lethal flying knee.