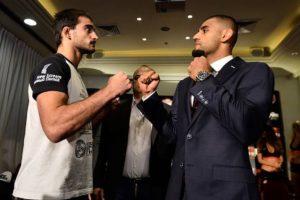 A majority of the field has been announced along with the Trilogy bout that will get the Bellator Welterweight Grand Prix going.

Lima is coming off losing the welterweight title to MacDonald at Bellator 192. The Brazilian has 24 finishes, 13 knockouts. Koreshkov has scored his 11th & 12th wins by knockout in his last two outings taking out Chidi Njokuani & Vaso Bakocevic. Lima & Koreshkov met the first time at Bellator 140, with Koreshkov taking a unanimous decision. At Bellator 164 Lima won by 3rd round knock out. Each time previous the title changed hands. Currently announced field of Welterweight Grand Prix competitors below.

As Bellator Head man Scott Croker had previously announced the first Welterweight Grand Prix, Douglas Lima vs Andrey Koreshkov will be part of the September 29th event in San Jose, California,  and is the kickoff to Bellator’s digital streaming deal with DAZN. The price for DAZN has been set at 9.99 a month.