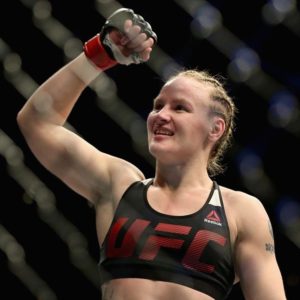 A change of plans has shifted Valentina Shevchenko’s announced bout in Toronto with Joanna Jedrzejczk into a meeting with Sijara Eubanks in New York, still for the vacant UFC Women’s Flyweight title.

While the story is going around the web, a reason for the change in venue or opponent isn’t fully known, the UFC was having issues looking in a main event for November 3rd in Madison Square Garden.

Shevchenko (15-3) had expected to challenge Nicco Montano for the title at UFC 228, but weight-cutting issues led to Montano being hospitalized and subsequently stripped of the title. “The Bullet” has fought once in the octagon at Flyweight submitting Priscila Cachoeira this past February.

Eubanks (3-2) had made it to the finals of TUF 26, but didn’t compete due to weight cutting issues. Being replaced by Roxanne Modeffari who lost to Nicco Montano. Eubanks made weight an a successful UFC debut in June defeating Lauren Murphy by unanimous decision.