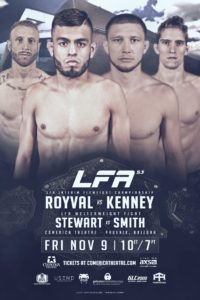 Legacy Fighting Alliance is at the Comerica Theatre in Phoenix, Arizona, for LFA 53, headlined by Brandon Royval vs. Casey Kenney for a interim LFA Flyweight title.

Getting the event started was a 3 fight prelim card. Both Hunter Azure & LaRue Burley nabbed unanimous decision victories, while Ryan Shell took less then 2 minutes to knock out Jimmy Scully. The AXS TV main card opened up Kevin Natividad picking up a decision over Tom Ni, nearly ending the fight in the 3rd with a rear naked choke; the ref possibly missing when Ni went out right before the bell. The toughness of Harvey Park was on full display, as the Force of 1 fighter fought through a compound fracture to his right ring finger, to better Le’Ville Simpson by unanimous decision. Park utilized the clinch during the bout and continually scored with the injured right hand. 19 months since his last fight, Andrew Tenneson got back in the cage and looked better then ever. Tagging Joey Miolla, who was head hunting or looking for takedowns, with a vicious onslaught of left hooks, knees, and kicks to the body an head; en route to winning a unanimous decision. Kamuela Kirk vs. Kevin Croom took place on the ground. Croom fought off Kirk’s relentless choke attempts to get top position, but when he did Kirk found a fight finishing triangle choke.  In the co-main event Kyle Stewart took Braden Smith to the ground 5 times grinding his way to a lopsided unanimous decision win. In the main event Casey Kenney got off to a fast start stunning Royval with a right hand and then taking the fight to the mat, hunting the submission the remainder of the first round. A pretty even back an forth on the feet Kenney would lean on his superior wrestling and scrambling ability to escape submissions and  remain in control. Taking a clean sweep on the score cards Casey Kenney is now interim LFA Flyweight champion.