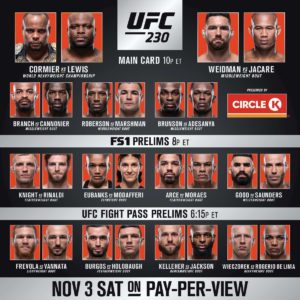 The challenger Derrick Lewis 33, is the number 2 ranked contender in the Heavyweight division, who ran his record to 21-5, 4 week ago with a come from behind 3rd round knock out win over Alexander Volkov. The win was Lewis’s 3rd straight and 18th career knock out victory. Cormier 39, with a 21-1-0, 1nc record, defends the heavyweight strap for the first time since wining it in July, with his 10th career knock out victory, dethroning Stipe Miocic.

BW: Brian Kelleher vs. Montel Jackson has been cancelled with Kelleher having become ill