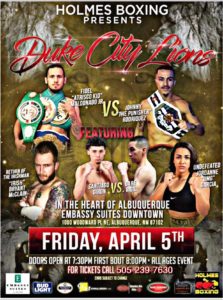 Holmes Boxing is coming to Albuquerque & Fidel “The Atrisco Kid” Maldonado Jr. is the headliner.
After years of sellouts at Buffalo Thunder Resorts & Casino, Holmes Boxing will leave the friendly confines, for a trip to Albuquerque’s Embassy Suites for “Duke City Lions” on April 5th.

The main event will be an 8-round affair between Fidel Maldonado Jr. & Johnny “The Punisher” Rodriguez. Maldonado Jr. returned to action after a 15-month hiatus from the sport, defeating Luis Gerardo Avila by unanimous decision in the main event of Holmes Boxing “Cold War 4”. The Atrisco Boxing representative has 19 of his 25 victories by knock out. Rodriguez is coming off an August 10th, 2nd round TKO of Emilio Hernandez in a bout for an ABF American West Super Lightweight title. “The Punisher” has scored 66% of his wins by knockout.

In a battle between herald amateurs making their pro debuts Albuquerque’s, Santiago Giron from Power & Glory Boxing takes on Gabe Vigil from Santa Fe. The promotion is currently searching for an opponent for Rio Rancho’s “Irish” Bryant McClain, as well as wanting to add one more bout to the card.