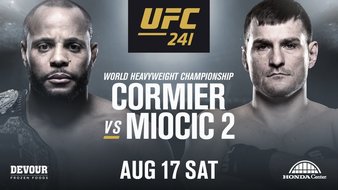 The dream of Daniel Cormier versus Brock Lesnar has faded away. Reality is the rematch; Daniel Cormier will defend his Heavyweight crown against the man he dethroned Stipe Miocic.
The UFC Heavyweight title bout will headline UFC 241 at the Honda Center in Anaheim, California.

Four months after stopping Miocic, Cormier cemented himself as champ Successfully defending at UFC 230, by submitting  Derrick Lewis, with a rear naked choke. Miocic made a record three successful title defenses before losing the title to “DC” at UFC 226. The 36-year-old is a  fire fighter in his regular career  and winner of 6 of his last 7 fights as a mixed martial artist.

The card will also see at Middleweight former title challenger Yoel Romero against top Brazilian prospect Paulo Costa. Romero is 9-2 in his UFC tenure or you could say he’s unbeaten in the octagon against everyone besides Robert Whittaker.  The former  Cuban Olympian looks to rebound from a UFC 225 split decision loss and also look to end a streak of having consecutively missed weight. Cost come soon in unbeaten after 12 pro bouts with 11 victories by knockout, including 4 spectacular performances inside the octagon.