July 20th, Legacy Boxing Promotions is coming back to Tingley Coliseum and doing so with a WBC title bout at the top of the 10-fight card.

The main event will see Josh “Pitbull” Torres looking to obtain his third championship belt. To do so he’ll have to get past Alfonso Olvera. Torres told Caged Minds, “Winning the WBC title puts me one step closer to getting a big fight against a top name fighter”. The Albuquerque native believes he has several advantages against Alfonso including, “my strength and my experience, five knockouts in a row and I don’t plan on slowing down anytime soon”. The New Mexico State Welterweight champion added he is handling his training camp as normal, “I train for every fight like it is a championship fight”.

Newly elevated to the co-main event is Matthew “Diamond Boy” Griego squares off with 16-fight vet Alfonso Olera. “The Diamond Boy” wants his fans to come and have big expectations for this fight, “Expect an exciting performance from me. I’m actually hoping to get some rounds in, but we’ll see how that goes. I’m very excited to get back in the ring. I’m feeling stronger than ever and hitting harder than ever”. It’s been 10-months since we last saw Griego in the ring and it’s been a trying time. Griego said, “It was very tough staying positive, but I’ve had dreams since I was 5 years old and I’m gonna keep pushing until I accomplish them. I know what I’m destined for and I’m coming to get it”. 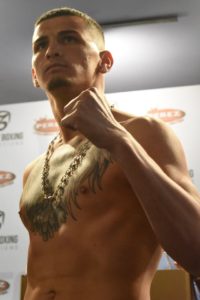 Fresh off a knockout of Joe Gomez-Martinez, Jose Luis Sanchez tangles with Tucson, Arizona’s, Jose “The Raging Bull” Pena. Sanchez said,“Right now, I’m very inspired in this boxing journey, knowing that I can also accomplish something big. It’s all hard work, no stop, that’s how we meet our goals in our family.” Sanchez knows what he wants to get done at “Night of Champions”, “My goal for July 20th is putting on a good show for my city and coming out victorious”.

Unfortunately, Randee Morales is off the card and the promotion is searching for an opponent for unbeaten Amy Salinas.

Returning to the ring 6-years after his first fight, Albuquerque’s, Gabriel Gabaldon, who trains out of Perez Boxing, squares off with, Belen’s, Jeff Bustos; who’s making his pro debut. 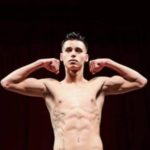 Over the last 6-years Gabaldon has been making his way around the boxing scene, “I have been training consistently in places like L.A. and Las Vegas, Nevada; but decided to come back home to fighting. Because, I wanted to build my record the right way and get my hometown of Albuquerque, New Mexico, behind me. Since, I feel like a lot of people here don’t really know who I am. Since, my last boxing match was on the Holms vs McGee card here, which has now been 6 years ago. Another reason I am returning to the sport is because I love having the family and friend support here in my hometown. There’s really nothing like it and it’s also the main reason I do it now”. 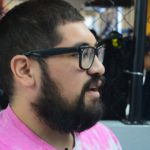 Going down from 175 lbs. to 170 lbs. Lorenzo Benavidez welcomes fellow Duke City native Randy Ramirez to the pro ranks. Benavidez told Caged Minds that his development continues by, “going down more in weight. I’m just keeping the ball rolling from my last 2 wins and using that momentum as extra motivation to keep winning. I’m nowhere near where I want to be, so I will keep going until I get their man”.

Coming off an October decision victory over Zaira Gonzalez, Bridgette Baca of Albuquerque will take on Bosque Farm’s resident Katie Ramirez. Ramirez will be returning to action for the first time in 20-months. Life has sure changed for Ramirez since the last time we saw her;

she been married and had her first child. Ramirez stated, “returning to the ring as a mom now is definitely something different in a good way! I now have a tiny human looking up to me and getting to set a positive example towards him is pretty amazing.”

“And, coming in facing Bridgette I know it’s going to be a great fight. I know she is a good fighter and going to be a tough opponent. So, I’m excited to be stepping back in the ring with an opponent like her”.

Baca says, “Some fight for the win and championships. I fight to feel the passion and spirit my mom had when I stepped into the ring, because she’s no longer with me. It’s the best kind of motivation and now I have two girls of my own to share it with.

In general, I am always excited for the opportunity to fight. Anybody that’s willing to step in the ring is game and I wouldn’t expect anything less than that from Katie. I’ve had a great camp and it will show in the ring. It’s going to be a fantastic fight! Thank you to my coach and husband Sean, Trina, all my team at Baca Fight Systems and of course Legacy Promotions”.

Adam Ramirez & Clinton Chavez both walked away from their pro debuts victoriously. Ramirez used to train under Hector Munoz, while Chavez is a current protege of “El Huracan”; and both have separate stories as to how this fight came together. 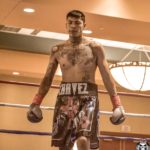 Chavez says, “This fight is happening because supposedly my opponent called me out after his win on the last Legacy promotions card. saying to Hector (coach), ‘Guess I’ll be seeing your fighter soon’. So, Hector made the fight”.

Ramirez said “My ex-coach, Hector Munoz told the promoter Angel Perez to match-up me and his new fighter Clinton Chavez. It’s kind of crazy fighting cause Clint and I trained together. Hector said he’d get me a fight that’s what we did”.

The two know each other well, but Chavez feels he knows how to get the job done on July 20th, “to get the win this

And currently scheduled to open the card is Akwesasne, Quebec, Canada’s Tevin Terrance who is awaiting the signature of a willing party.