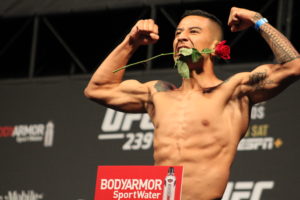 Legacy Fighting Alliance is the top feeder organization to the Ultimate Fighting Championship and in that spirit when a replacement was needed to face Marlon Vera. The LFA has allowed Nohelin Hernandez out of his contract so that he can make his octagon debut at UFC 239.

Nohelin Hernandez heads to the UFC on a 4-fight win streak. Nicknamed “Suave” the Californian has 7 of his 10 wins by decision. Hernandez was scheduled to face Anthony “El Toro” Birchak in the main event of LFA 72 on July 6th.  LFA has said that Birchak will remain on the card and a search for a suitable replacement is underway. The 33-year-old Arizonian is a former MFC champion and a vet of the UFC & Rizin Fighting Federation. This past October Birchak fought in the United States for the first time in over 2-years defeating Adam Martinez by first round knockout.

“LFA is the top developmental organization in the world,” stated Soares. Nohelin Hernandez is one of our top bantamweight prospects and we are letting him out of his contract so he can pursue his dream of competing in the UFC. Anthony Birchak will remain on the card at LFA 72, which will be our seventh event at Comerica Theatre in downtown Phoenix.”