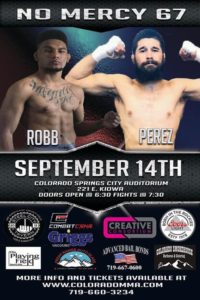 Colorado Springs, Col AJ Robb versus Belen, NM Derek “Rage” Perez has been announced as the main event of No Mercy 67.

The event is a 13-bout MMA card set for September 14th at the Colorado Springs City Auditorium.

Robb (2-2) a Colorado Springs native splits his training between the 719 Fight Team & JacksonWink MMA in Albuquerque, NM. Robb was a Sparta Combat League champ and won a Colorado fighter of the year award as an amateur. As a professional Robb has fought three times for Legacy Fighting Alliance, suffering both his losses in the octagon the current UFC fighters Mario Bautista & Hunter Azure. In his last win at LFA 57, Robb picked up his first finish as pro, submitting Chance Chin.

Perez is a 28-fight vet of the Combat Sports world when you add up his MMA (5-7 according to Perez 3-7 on Tapology), Boxing (2-12-1), & Bare Knuckle Boxing (1-0) records. The head man at Perez Fighting Systems, Derek has been running the gym with his old Brother Gene “The Kid” Perez for the last nine years and has cornered about 50 fights in that time. We last saw “Rage” in the cage at KOTC: Starbound 2, this past December defeating Nikko Nathan by decision. The fight was Perez’s 8th of 2018 competing 5 times in Boxing, twice in MMA, & making a successful Bare Knuckle Boxing debut.  The 27-year-old has boxed three times in 2018. Perez really is willing to fight anyone, anywhere, with any rules.