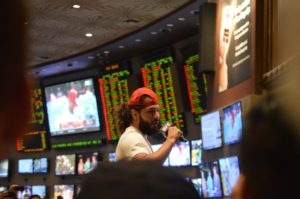 The much anticipated announcement of what title fight will headline UFC 244 was made during UFC 242. The big apple will be treated to fight to officially crown the Baddest Mother Fucker.

Returning to action after 3-years away, Nate Diaz defeated former Lightweight champion Anthony Pettis by unanimous decision. During his in octagon post-fight interview Diaz targeted his next foe calling out another “Gangsta” as Diaz put it, Jorge “Gamebred” Masvidal. “Gamebred” is coming off a record setting 5 second, flying knee knockout of previously unbeaten Ben Askren, which happened at UFC 239.

This is much more then Stockton, Cal versus Miami, FL or Scrap Pack versus American Top Team, or number 6 versus number 3 ranked welterweight contenders; this is real recognizes real with that street credit on the line. To that note reportedly the UFC will have a BMF title up for grabs.

Diaz a pro since 2004 was fighting on the underground scene years before. Masvidal turned pro in 2003 but has been throwing down since the Kimbo Slice Backyard Brawling days. Both fighters can do it all but prefer to utilize their boxing. Diaz has 16 of his 20 victories by stoppage with 11 by submission, while Masvidal has 17 finishes out of 34 wins, 15 by knockout.