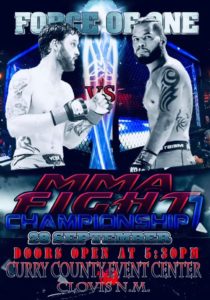 Force of One MMA Fighting Championship 7 has been announced for September 28th. The event will be a 10-fight card featuring 9 amateur bouts & a professional main event.

The show takes place at the Curry County Events Center. The headliner will see at 155 lbs. Nikko Nathan, from Force of One Martial Arts against Abilene, TX Nicholas Webb. Nathan is ferociously aggressive and became known on the NM amateur scene for being part of fan friendly brawls. Win-less in the cage since turning pro, this past June Nathan made a successful debut as a Boxer defeating Eloy Valverde, by unanimous decision. Webb will return to the cage after more then 3-years after since being submitted by Roy Saucedo, also a Force of One Fighter, in his pro debut. As an amateur Webb scored 66% of his wins by knockout.

*Records from tapology & card is subject to change.