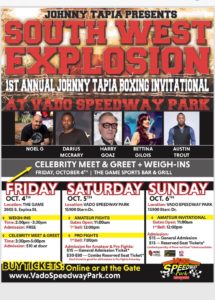 Saturday the festivities take place at Vado Speedway. Amateur’s take to the ring first, beginning at Noon, doors open at 11 am. The first bell for the pro card is scheduled for 7 pm. The main event will see unbeaten 23-year-old, Abel Mendoza from El Paso, TX against 44-fight vet Gistavo Molina from Tiaxcala, Mex. Mendoza has nearly two-thirds of his victories by knockout, while Molina has a third of his win by knockout, but has been stopped in three-fourths of his losses.

In the co-main event Las Cruces’s “Wreck-it” Randy McCarty faces Peralta, NM “Mano” Manuel Otero. The two have battled before in the cage, a bout that McCarty won by decision. They were also scheduled to run it back in August, but that fight fell through. McCarty will be back in the ring for the first time since December 2017, having been focusing on his MMA career. Otero has been out of the ring even longer, last lacing up the big gloves in September 2016. Safe to label this as a grudge match.

Also willing to fight weather it be in a ring or a cage, Juan Carlos Guillen from Las Cruces, NM is reportedly going to tangle with Alejandro Moreno, who according to Boxrec is suspended by the Texas commission. Unbeaten Zach Prieto from El Paso, TX is set to Mexico’s Ernesto Berrospe. Unbeaten Henry Arrendondo from San Antonio, TX will take on Belen, NM Gene “The Kid” Perez, who’s continues to face every top prospect he can find. Lastly Las Cruces’s Savion Kent makes his pro debut against El Paso’s Javier Nunez.

On Sunday the Vado Speedway again opens at 11 am and an amateur invitational will start at noon. 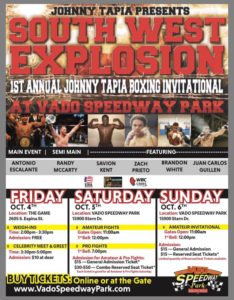