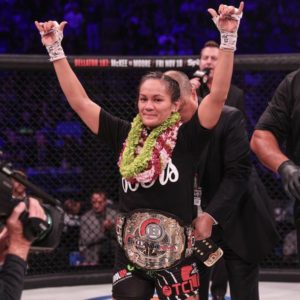 Bellator MMA has announced they’ll be back in Hawaii, in late December.

The event will be the 21st December at the Neal S Blaisdell Center in Honolulu, Hawaii.

The women’s Flyweight title will be on the line in the main event, as Ilima “The Ilimanator” Lei-Macfarlane (10-0) defends against Kate Jackson (11-3-1). Macfarlane is coming off her third successful title defense, seeing the doctor stop her fight against Veta Arteaga in the 3rd-round ;after getting busted up by MacFarlane’s elbow strikes. “The Ilimator” has eight of her 12 wins by stoppage, six by submission, including four armbars. Jackson was a member of Season 23 of The Ultimate Fighter, who hails from Lostwithiel, Cornwall, England. Jackson has won three of four fights in the Bellator cage. The last two victories; a decision over Anastasia Yankova & a first round TKO of Lena Ovchynnikova.

The other announced contest is the co-main event, unbeaten, AJ “The Mercenary” McKee (15-0) battles Derek “The Stallion” Campos (20-9), in a Featherweight Grand Prix quarterfinal. McKee punched his ticket to the quarterfinals with one big left hand that put away Georgi Karahanyan, in only 8 seconds.  The win gives McKee 10 stoppage victories & six by knockout.  Campos out wrestled, former champion, Daniel Straus to advance pass the opening round, giving “The Stallion” his 9th decision win.