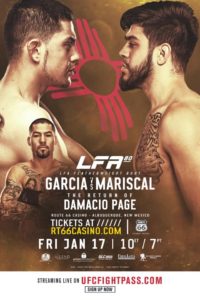 A year after their first trip to New Mexico, Legacy Fighting Alliance will return to the Land of Enchantment to kick off 2020 with LFA 80.

The main event will be at featherweight, Steve “Mean Machine’ Garcia Jr. against Jose “Chepe” Mariscal.  The co-main event is one that local fans have been waiting for. At bantamweight Damacio Page faces Abel Cullum. LFA 80 is set for January 17th at the Legends Theater inside of Route 66 Casino in Albuquerque, NM.

Garcia Jr. is on a three-fight win streak. The Bellator vet, closed out his 2018 winning a unanimous decision over Abel Cullum.  The “Mean Machine” has won consecutive fights by first round TKO. In May Garcia stopped Andrew Whitney and Desmond Torres in August. The win over Torres came on the Contender Series, missing weight stopped Dana White from offering the Rio Rancho native a UFC contract. In his new weight-class the JacksonWink fighter will look to continue to peruse his octagon dream.

Mariscal is an Illinois native who’s a member of the Elevation Fight Team in Denver, Colorado. “Chepe” has won four of his last five fights. Mariscal made his promotional debut at LFA 65 defeating Youssef Zalal by unanimous decision. At LFA 65, Mariscal was on the wrong side of a highlight reel knockout loss to Joanderson Brito. “Chepe” got back in the win column in September, stopping Vladimir Cerbadji inside of a round.

The co-main event will feature Damacio Page a pioneer of the lower weight classes here in New Mexico.  “The Angel of Death” won the Legacy FC flyweight title and knockout of the year honors in November of 2014. When he launched Brain Hall into unconsciousness with a right hand. With belt in hand the UFC & WEC vet, competed on The Ultimate Fighter: Tournament of Champions.

Jerome “The Renegade” Rivera, who fought for the inaugural LFA flyweight, face Kendrick Latchman “The Uprising”. Rivera has six finishes all submissions, while Kendrick has five finishes all knockouts.

In the lightweight division Chris “Breezy” Brown will face Carrington “Jetsetter” Banks. At LFA 71 Chris Brown showed why he’s also been call “The Future” at JacksonWink MMA and he put everyone on notice with his striking display in stopping Yemi Oduwaole. Banks is a Bellator vet who was part of TUF 21, a member of the Blackzilians as they took on American Top Team.

In middleweight action Jordan “The Beverly Hills Ninja” Wright squares off with Gabriel “Zangief” Checco. Wright, who has all his wins by stoppage, submitted Craig Wilkerson in under 90 seconds at LFA 30. Checco has fought for RFA & LFA, all three wins by stoppage.