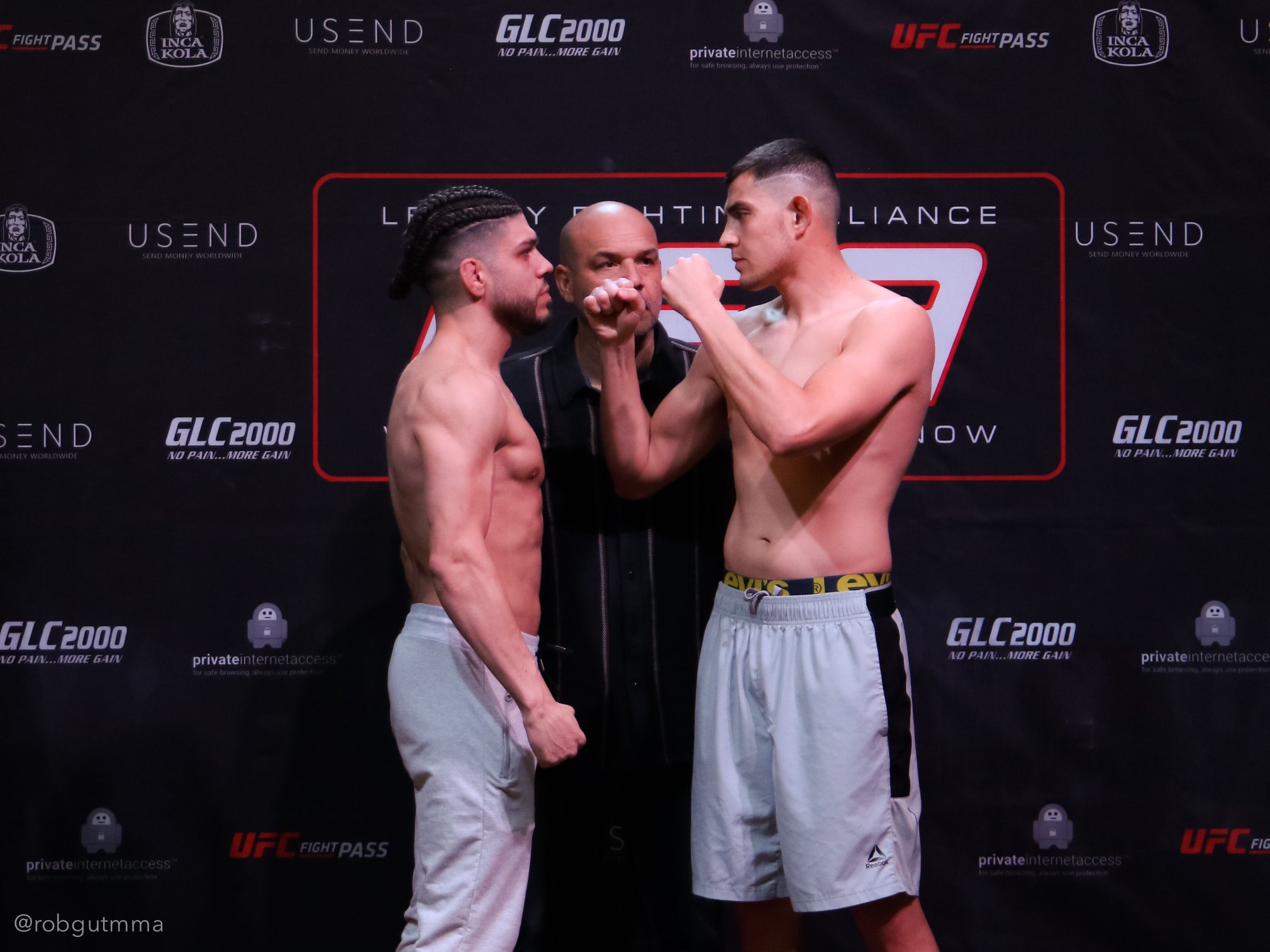 The Legends Theater inside the Route 66 Casino hosted LFA 80. The main event of the 12-fight card is a pivotal featherweight contest Steve “Mean Machine” Garcia Jr. versus Jose “Chepe” Mariscal.

The amateur card was explosive. If you blinked you might have missed it. Ty Miller displayed an accurate right-hand cracking Caleb Gunter several times before knocking Gunter to the ground. Miller got the finish after a few follow up punches on the ground. Mario Moore clipped Dwight Maters with a left hook to the temple, putting Maters on the ground with a right on the chin; in just thirty-seven seconds. The fireworks continued in the first professional contest as Jalin Fuller took out Gabe Rodriguez in only twelve seconds with a left knee to the body. Caleb Ramirez survived having his back taken in the 2nd round, defeating Chris Rojas by unanimous decision. While Rojas had control time the judges favored Ramirez striking, featuring right elbows to fend off takedowns and a crisp right cross.  Ricky Esquibel against Josiah Reyes hit the mat early. Reyes punched his way out of an armbar to take Esquibel’s back finding a rear naked choke for the first round finish. Edwin Cooper Kr. sent Sean Cerveny to the mat early with a right head kick. Cerveny with his cleaver guard found the space to put Edwin Cooper Jr. in an armbar. The ref jumps in for the finish, I didn’t see Cooper Jr. tap; but the ref Joel Ojeda says he did.  A perfect example of why we need the NM commission to adopt instant reply.. After controlling much of round 1 on the ground, Tyler Ray took Josh Streaker back to the mat in the 2nd round securing a rear naked choke finish. A perfectly timed kick from Wright up the middle, met Gabriel Checco right in the jaw with Wright’s knee putting Checco on his back. Wright would follow to the ground scoring the knockout with rapid fire punches. After a grueling three rounds between Toninho Gavinho & Josh Marsh the judges returned a razor thin split decision win for Toninho Gavinho again favoring damage of control. In vintage fashion Carrington Banks leaned on his wrestling grinding out a unanimous decision over Chris Brown. In doing so Banks set an LFA record for the fewest number of strikes landed in 3-round decision victory. Jerome Rivera return to his roots battering Kendrick Latchman on the inside with his thia clinch. Rivera in spectacular fashion pulls out from his back of tricks the flying triangle. With the submission locked in Rivera was able to leverage himself to the top position forcing the tap from a mounted triangle choke. Thenerly event was the kind of fire fight that nearly has the Albuquerque Fire Department called. Garcia Jr. scored a pair of knockdowns of Mariscal in the first. In the 2nd rounf both fighters came out guns blazing. Garcia trips Mariscal after some ground & pound Mariscal escapes to his feet. Garcia Jr. closes in with “Chepe” stuck on the cage, the “Mean Machine” lands a knee and two follow up elbows in the clinch. “Chepe” eats the three strikes and ref Raul Barrata jumps in waiving off the contest, giving Garcia Jr. the 2nd round TKO victory.