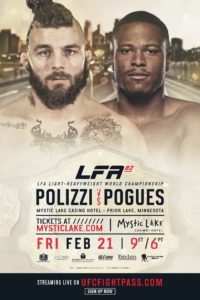 LFA will crown a new 205 lbs. champion when the promotion returns to the North Star State for LFA 82.

Quote from lfafighting.com “I am excited to announce that we are bringing the LFA light-heavyweight championship to Minnesota at LFA 82,” stated LFA CEO Ed Soares. “Alex Polizzi and Jamal Pogues are two of the top 205-pound prospects in the world and they are both coming off dominant wins last summer. Polizzi won his LFA debut via TKO and Pogues impressed UFC President Dana White on Dana White’s Contender Series. This will be the first LFA title fight of 2020 and it will continue our tradition of producing great light-heavyweight champions.”

Polizzi went 3-0 in 2019. At LFA 70 defeating  Pierre Walters by TKO in just under three and a half minutes. In September Polizzi finished his year defeating UFC vet Daniel Jolly in just over four and a half minutes. The former college wrestling standout at Northwestern has all five of his victories by stoppage.

Pogues is currently on a three fight win streak. A vet of Bellator, the fighter nicknamed “The Stromtrooper” is coming off a unanimous decision win over Marcos Brigagao on Dana Whites Contender Series. A Joe Stevenson protégée, Pogues has five of his seven win by stoppage.

In the co-main event Jake “The Working Man” Childers faces “The Natural” Nate Richardson. Childers is unbeaten, coming off a thirteen second knockout of Janey Simmons from LFA 70. Richardson has won his last five coming off a LFA 77 knockout of Matt Jones.