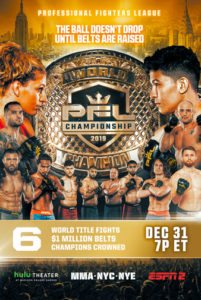 To make it to the championship fighters first competed twice during the regular season. Then had to win twice in one-night during the playoffs. Everyone expect for Alex Gilpin, who replaces Daniel Pineda in the featherweight championship. Pineda is currently awaiting his day in front of the Nevada Athletic Commission after a failed drug test from Oct. 17th, the evening of the Featherweight & Lightweight playoffs. Gilpin & Plamer fought in both the regular season and the playoffs. Both times Palmer won by decision.

Two fighters, Lance Palmer at featherweight & Natan Schulte at lightweight, are in search of back to back championships. Ray Cooper III is in the finals for a second time looking for his first championship after falling short last year. Kayla Harrison, Ali Isaev, Natan Schulte, Lance Plamer, & Emiliano Sordi have all reached the finals without a loss this season.