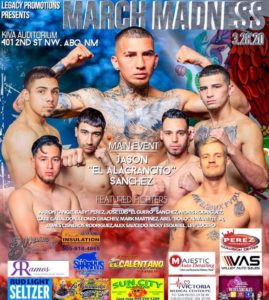 Jason Sanchez has a new opponent while there’s also been a conclusion to the opponent search for Aaron “Angel Baby” Perez.

The focus of the focus of the main event is still the same. Jason Sanchez fights at home for the first time in a year. With four more fights on his record. Having won a WBO Youth title and fought for the WBO World title. Instead of taking on Daniel Rosas, without clarification, Legacy Boxing Promotions has announced “El Alacranctio” is now going to meet Aleem Jumakhonov. A native of Takijistan residing in California, with  half his wins by knockout. In September Jumakhonov handed previously unbeaten Anthony Chavez his first loss by decision. Sanchez is coming in off November knockout of Adeilson Dos Santos.

Accepting the challenge of facing the unbeaten, ABF champion will be Clovis’s Rafael Reyes, who has 28-fights on his resume. Perez won the ABF Americas title in November, also picking up his 6th knockout win, stopping Isao Carranza. Reyes is a power puncher with 14 of his 18 wins by knockout.
Legacy Boxing Promotions presents March Madness, March 7th at the Kiva Auditorium inside the Albuquerque Convention Center.