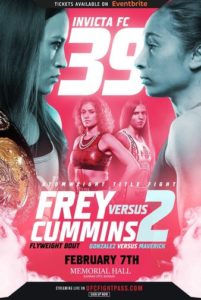 Memorial Hall in Kansas City, Kansas is the host venue for Invicta Fighting Championship 39. In the main event we have a rematch, this time Ashley “Smashley” Cummins faces Jinh Yu Frey for the vacant Inivcta FC atomweight championship.

The main event has been scheduled to see Jinh Yu Frey defending the Invicta atomweight championship against Ashley Cummins, that was until Frey missed weight by 0.8 lbs. The results is Frey being stripped of the title, but can earn herself another title bout with a victory. Cummins successfully made weight and is still eligible to win the championship.

In the co-main event we have a number one contenders bout at flyweight as Miranda Maverick meets UFC vet, Pearl Gonzalez. Maverick is on a four-fight win streak coming off winning Phoenix Rising 2. Gonzalez has won four of her last five fight coming off a decision win over Brogan Walker-Sanchez.

*With missing weight the victory means the title remains vacant