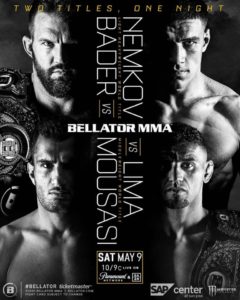 The Bellator Middleweight title won’t be vacant for long.

Earlier this week Rafael Lovato Jr. was forced to relinquish the Bellator Middleweight title due to a rare brain condition.

Since winning the Bellator Welterweight Grand Prix and the Bellator championship for the third time, Douglas Lima has been calling for a match-up with the 185lbs. champion. Lima will now get his opportunity to join Ryan Bader & Patrico Freire as simultaneous multiple division champion, when he faces former champion Gegard Mousasi.

The bout will be the co-main event of Bellator 243 at the SAP Center in San Jose, California, on May 9th.

Lima had an epic run through the Bellator welterweight Grand Prix submitting Andrey Koreshkov in the Quarterfinal.  Knocking out Michael Page in the Semifinals at Bellator 221. And defeating Rory Macdonald by decision in the finals to regain the welterweight title he’d lost twenty months prior. “The Phenom” has won 26 times by stoppage, 16 have come by knockout.

Losing the Bellator Middleweight title to Lovato Jr. ended an eight-fight win streak for the former Strikeforce light-heavyweight champ. Mousasi rebounded at Bellator 228, evening the score with Lyoto Machida, who had beat Mousasi in February of 2014.  Mousasi has 38 of his 46 victories by stoppage with 26 knockouts.