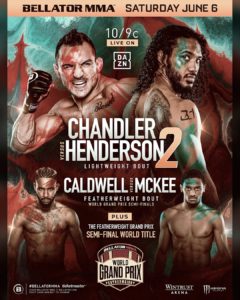 Bellator MMA will be in the Windy City in the beginning of June where a rematch between former champions will take center stage.

The main event of Bellator 244 will see the second meeting between former WEC & UFC champion “Smooth” Benson Henderson (28-8) versus three-time Bellator champion “Iron” Michael Chandler (20-5). Henderson is on a four-fight win streak. The streak started with submitting Roger Huerta by guillotine choke. And has continued with decisions over Saad Awad, Adam Piccolotti, and Myles Jury. In December Chandler rebounded from losing the title belt to Patricio Freire, by knocking out Sidney Outlaw in under three minutes.

In a featherweight grand prix semifinal bout former bantamweight champion Darrion “The Wolf” Caldwell (14-3) will square off with unbeaten AJ “The Mercenary” McKee (16-0). Caldwell beat Henry Corrales by decision in the opening round of the grand prix and submitted Adam Borics in the quarterfinals. McKee won his opening round bout knocking out Georgi Karakhanyan in just eight seconds. And won his gran prix quarterfinal bout by a third round submission of Derek Campos.

Bellator 244 is scheduled for June 6th at Wintrust Arena in Chicago, Illinois.