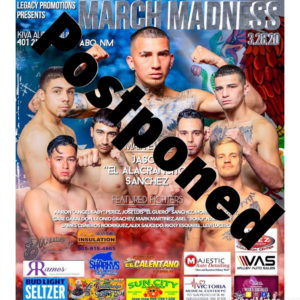 The Covid-19 virus has already affected many of the worlds major sports leagues. The NM state Basketball tournaments where played behind closed doors. Albuquerque Public Schools have announced they’ll be closing for three weeks.  What is the fate of the next several combat sports events that have been announced for March & April in NM?

Isidro Castillo the head man at School of Hard Knocks Promotions has announced Combative Wars 3, which was to be a Boxing & MMA event has been cancelled.

Southwest MMA Series XXXI is currently set for April 4th at Buffalo Thunder Resort & Casino. Promotions officials I spoke with said “We met with the Casino yesterday to see how they felt about hosting the event. They are 100 percent committed to hosting it. We are going full speed ahead and will monitor the situation as the event gets closer. We are watching closely and in contact with the Casino daily.”

Just this week Teresa Tapia announced she’d be putting on an Impact Boxing card at Buffalo Thunder Resort & Casino, featuring WBC title holder Josh “Pitbull” Torres on April 11th. I reached out to Teresa Tapia for a comment on the status of the event and she said “I’m waiting on confirmation from Casino of how to proceed. Things are crazy right now in NM. Safety is everyone’s first priority.”

Cagedminds.com will keep everyone up to date on the status of these events as more news becomes available.