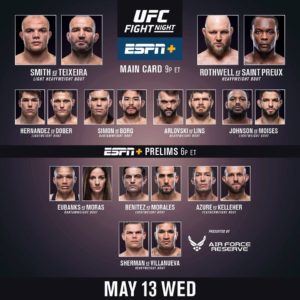 UFC on ESPN+ 29 is event two of three in a weeks span the Ultimate Fighting Championship is putting on from the Vystar Veterans Memorial Arena in Jacksonville, Florida. The ten-fight card is headlined by a top ten light-heavyweight match-up former title challenger Anthony Smith & Glover Teixeira.

The event was originally scheduled for eleven-fights but is down to ten after Karl Roberson, who missed weight , was pulled from the card being deemed medically unfit to compete. Roberson was to face Marvin Vettori on the main card portion of the show. The entire card is watchable on ESPN+.

Chase Sherman started off his second run with the UFC chopping down Ike Villanueva with low kicks and finding the finish early into round two after Villanueva crumbled to the ground from a smashing left elbow. After a rough first round of weathering the storm, Brian Kelleher sends Hunter Azure from the ranks of the unbeaten’s with a left hook on the chin. The first fight to go to the judges score cards was contested all on the feet as Omar Morales out dueled Gabriel Benitez. Sijara Eubanks won the striking and dominated on the ground, ending  a two fight skid defeating Sarah Moras by unanimous decision. Michael Johnson controlled an all striking first round. But the second frame saw Thiago Moises come out an forced Johnson into a scramble  where the Brazilian found the victory snatching up a heel hook for the win. Former heavyweight champion Andrei Arlovski  spoiled the debut of PFL winner Phillipe Lin’s, utilizing his kicking game to win a unanimous decision. Take downs in the in the first and third rounds saw Ricky Simon edged out Ray Borg for  a split decision win. After spending part of round one on his back Drew Dober stuffed all of Alexander Hernandez’s takedown attempts in the second round, allowing Dober to make Hernandez quilt from his forward pressure and heavy hooks. Getting the second round TKO. The co-main event was a close contest that saw Ben Rothwell’s  clinch game and relentless pressure edge out the counter striking of Ovince Saint Preux. The first two rounds of the main event saw Anthony Smith with a high volume distance attack. Somewhere in the third round the Teixeria found a home on smith face. Teixeira would utterly dominate the Rey of the fight very striking landed saw smith curling up in pain, no resistance on the takedowns. Teixeria taking down Smith advancing to the mount and pounding till the red stepped in.