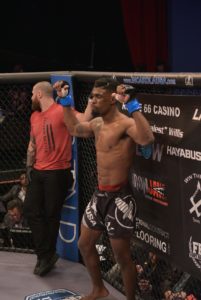 After four straight weeks of action from the Sanford Pentagon, LFA will take two week to regroup before presenting “Phase 2”.

“Phase 2” will also take place at the Sanford Pentagon and will be three consecutive Friday nights of action.

Begins on August 21st with LFA 88. The main event will feature Vinicius “The Brazilian Bad Boy” De Jesus (9-2) squaring off with Jaleel “The Realest” Willis (12-2) for the vacant LFA welterweight championship. De Jesus is a Bellator & CES vet whose has four of his six finishes by knockout. This past September “The Brazilian Bad Boy” won his fourth in a row defeating Chris Lozano to capture the CES welterweight strap. Willis will step into the LFA octagon for the fifth time, having won three in a row by decision. At LFA 42 Willis opened eyes with a devastating finish Chel Erwin-Davis. At LFA 67 it was one way traffic as “The Realest” got his current win streak started defeating Dakota Bush.

“Phase 2” will continue with LFA 89 on August 28th & LFA 90 on September 4th. All three events will stream on UFC Fight Pass.