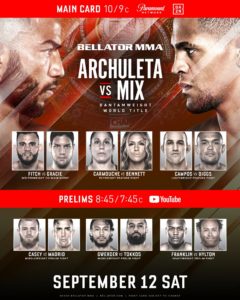 The Fightsphere inside the Mohegan Sun Arena in Uncasville, Connecticut is host to the Bellator 246. The seven-fight card is headlined by Juan “The Spaniard” Archuleta battling Patchy “No Love” Mix for the vacant Bellator bantamweight championship.

Archuleta was a four-division champion in King of the Cage.  “The Spaniard” got back in the win column at Bellator 238 defeating Henry Corrales. After a loss to Patricio Freire ended Archuleta’s 18-fight win streak and hopes of winning the Bellator featherweight world grand prix. Mix is a former King of the Cage at 135 lbs. who defended his title four times before moving on to Bellator. In less then five minutes of cage time in Bellator, Patchy has submitted Ricky Bandejas & Isaiah Chapman.  At Rizin’s new year show, bring in 2020, “No Love”  picked up his 9th submission win, a rear naked choke of  Yuki Motoya.

The co-main event is a welterweight battle between high level grapplers who both participated in the Bellator world grand prix, Jon Fitch meets Neiman Gracie.

An accidental punch to the back of the head from Davion Franklin to Ras Hylton ended their fight prior to the final bell of the third round. On the strength of three take-downs and heavy punches Davion Franklin improved to 2-0. A big left hand staggered George Tokkod, Ty Gwerder follows up grabbing the Thai clinch. A knee up the middle gets the finish for the third round  TKO. The promotional debut of Daniel Madrid saw the Arizona fighter going the distance for the first time in his career out working Pat Casey earning the split decision win.

Twice Keoni Diggs got on the back of Derek Campos. The second time Diggs made the most of the position choking Campos to sleep just before the final bell. Two rounds of wearing down Deanna Bennett, Liz Carmouche took the back and found the submission y rear naked choke late in the third. The co-main event as expected delivered a tactical grappling match.  Neiman Gracie nearly finishing Jon Fitch in the first with an armbar. Fitch attempting to scramble out from under Gracie. Leads to Gracie in the inverted triangle position which he abandons to dive on a leg getting the tap from a heel hook in the second round. Patchy Mix had Juan Archuleta’s back for two rounds but couldn’t find the finish. For the next three rounds Archuleta allusively moving around,  periodically engaging with combinations, making sure to attack to the body; getting back on his bike continuing the pattern. The strategy would payoff as Archuleta as he takes claim of the vacant Bellator bantamweight by unanimous decision.