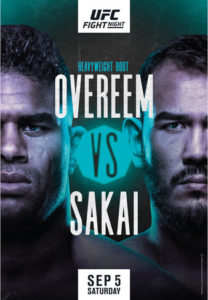 A meeting between top ten heavyweights’ headlines UFC on ESPN+ 34.

Number six ranked contender Alistair Overeem faces number nine ranked Augusto Sakai. Overeem has been a longstanding fixture on the marquee. A former Pride, K-1, Dream and Strikeforce champion. The Dutch fighter has 89% of his wins by stoppage; 24 knockouts and 17 submissions.  After failing to dethrone Stipe Miocic, in 2016, many thought Overeem’s chances to be UFC champion had faded away. But, “The Demolition Man” has won three of his last four fights, all by technical knockout to put himself back in title contention. Up and coming, Brazilian Augusto Sakai had his first professional fight 12 years after Overeem. Many American fans first saw Sakai compete in Bellator where he went 3-1-1. In 2018, on the Brazilian season of Dana White’s Contender Series, Sakai earned his UFC contract with a second-round stoppage of Marcos Conrado Jr. The 29-year-old is climbing up the rankings with a 4-0 start to his UFC career; including TKO wins over Chase Sherman & Marcin Tybura, giving him 11 career knockout victories.

Former title challenger Ovince St. Preux faces rising prospect Alonzo Menifield in the co-main event. The bout was originally scheduled for August 22nd but was moved to September 5th after “OSP” tested positive for Covid-19. St. Preux is returning to 205 lbs. after a trip up to heavyweight where he was on the latter end of a split decision, losing to Ben Rothwell. Menifield has finishes in all nine of his wins, including seven victories inside the first round. The Fortis MMA product looks to rebound from his first loss, dropping a decision to Devin Clark at UFC 250.

During the pandemic betting surged on sports like UFC that managed to keep the train running. For those of you who are new to wagering online this sports betting 101 guide, is an awesome place to start. It covers how to read odds and bankroll management for those new to the game. Ahead of this weekend’s action the average odds from five reputable sportsbooks, Overeem is a -159 favorite while Sakai is a +131 underdog.

Taking out the juice, the win probability is 58.6% to 41.4% in favor of the Dutchman. Bettors looking for a bigger payout can get Overeem by KO or submission at around +120, and Sakai by KO/submission at an enticing +210. The odds to win by decision are considerably longer: Overeem by decision is close to +300. Sakai on points is around +450.

When & How to Watch