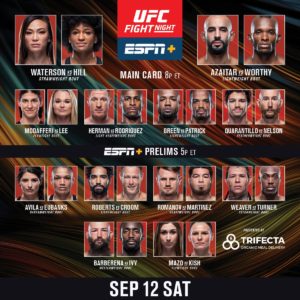 “The Karate Hottie” Michelle Waterson is former Invicta FC champion at atomweight (105 lbs.).  Waterson has 12 finishes in her 17 victories – nine submissions and three knockout. Angela “Overkill” Hill is a former Invicta FC champion at Strawweight. Hill has won three of her last four fights. “Overkill” has five finishes in her twelve wins all knockouts.

Sabino Mazo pushed her current win streak to three in a row, sitting Justine Kish down with a head kick- taking Kish’s back, finishing the fight by rear naked choke. In his first fight in 15-months, the power punching and takedown defense of Bryan Barberena took the decision win over Anthony Ivy. Jalin Turner made it back to back wins. After a second knockdown of Brock Weaver, Turner took Weaver to the ground, took the back and finished with the rear naked choke. Alexander Romanov remain unbeaten after after a successful octagon debut taking Roque Martinez to the ground. And after a brutal beating secured a fight ending head and arm choke. On a day notice, up a weight-class, Kevin Croom clips Roosevelt Roberts with a left hand on the chine, sinks in a high elbow guillotine to force the tap. After a rough first frame, Sijara Eubanks had a dominate second on top of Julia Avila, including a near rear naked choke finish. Third again saw Eubanks win the grappling to take the decision victory.

Nearly finding the finish at the end of the second round, Billy Quarantillo landed a one two putting down Kyle Nelson second into the third round. Two rounds of dominate grappling and letting his hands go in the third round, Bobby Green won his third straight decision defeating Alan Patrick. Most likely behind on the cards, desperate to get the fight on the ground, Ed Heman fell to his back from Mike Rodriguez elbows. Herman on his back locks in the kimura, sweeps, throws his leg over Rodriguez’s head for maximum torque forcing the tap; for his third straight victory. The fight has controversy as in the second round a what should have been fight ending body shot was mistakenly called a low blow. Four successful take-downs, five-minutes of top control, and a plus 20 in landed strikes sees Roxanne Modafferi out work Andrea Lee for the decision win. The co-main event ended in explosive fashion as overhand rights and left hooks flew from Ottman Azaitar until the ref had to pull him off Khama Worthy. Angela Hill had a strong start to the main event landing some big right hands.  A takedown in the third round turn momentum in favor of  Wateerson who looked to have a speed advantage in championship rounds,  edging out Hill on the scorecards in a fight that could have went either way.