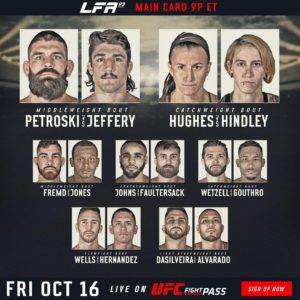 Hartman Arena in Park City Kansas hosts LFA 92.  The nine-fight card is headline by a middleweight collision as Aaron Jeffery squares off with Andre Petroski.

Andre Petroski was a college wrestler who has been a finishing machine since transitioning to MMA.  A 100% finishing rate that includes not seeing a third round and three wins by knockout for the American. Jeffery comes in with a wealth of kickboxing experience. The Canadian fighter has six wins by knockout including his last two wins over Dennis Olson & Bruno Assis.

Josh Fremd puts a quick halt to this one!#LFA93 pic.twitter.com/AF9Z7KP6Mu

At last. The MMA return of the Silveira bloodline.#LFA93 pic.twitter.com/OpeHqJHXEd