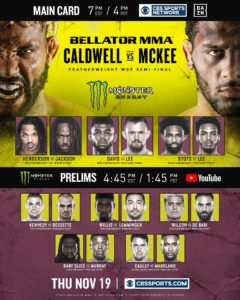 Darrion Caldwell is a former champion at bantamweight, who beat Henry Corrales by decision & submitted Adam Borics to advance to the featherweight grand prix semifinal. Unbeaten Aj McKee knocked out Georgi Karakhanyan is eight seconds in the opening round. And in the quarterfinals “The Mercenary” submitted Derek Campos with a triangle armbar combination.