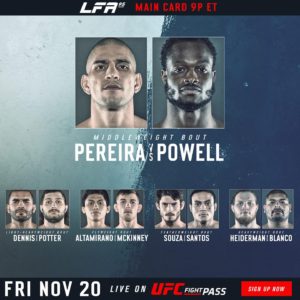 Hartman Arena in Park City, Kansas hosts LFA 95. The five-fight card is headlined by a middleweight showdown between knockout artists.

The main event has two-division Glory kickboxing champion Alex “Poatan” Pereira against Thomas “Diamond” Powell, who has three of his four his by knockout. The co-main event has Myron “The Future” Dennis, who’s won back to back decisions, colliding with Dylan “Big Poppa” Potter, who is on a three-fight win streak.

The event streams on UFC Fight Pass at 9 p.m. ET.