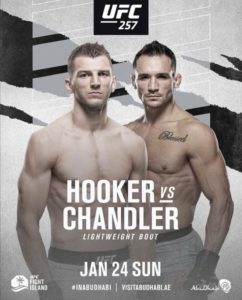 After much speculation and rumor the UFC 257 co-main event is official and will see the octagon debut of “Iron” Michael Chandler.

Welcoming the six time Bellator champion to the Ultimate Fighting Championship will be New Zealand’s Dan “The Hangman” Hooker.

Chandler signed with the UFC on the strength of first round knockouts of Sidney Outlaw at Bellator 237 & Benson Henderson at Bellator 243. Chandler has already gone through his first UFC fight week. Making weight at UFC 254 as the available alternat for the Khabib Nurmagomedov versus Justin Gaethje title fight.

Hooker joined the UFC roster in mid 2014 going 3-3 in his first six fights. Since then “The Hangman” has won seven of his last nine. The Kiwi fought ten rounds in 2020 going the distance in Fight of the Year caliber affairs, defeating Paul Felder & coming up short on the score cards against Dustin Poirier.

While not official it is not out of the realm of possible that the winner of the co & main events could meet down the road with the title on the line.