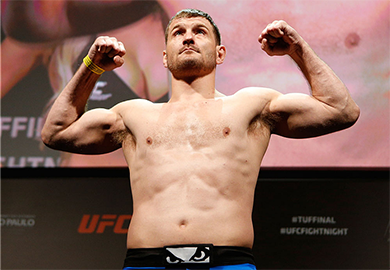 Their first meeting came at UFC 220. Ngannou road a 10-fight win streak into the fight. Miocic would out wrestle and grind up Ngannou for 25 minutes. The lows would continue as Ngannou lost a decision to Derrick Lewis. In November of 2018 “The Predator” regained his form and has run off four straight first round knockouts.

The first win over Ngannou was Miocic’s third successful title defense. At UFC 226 Miocic was dethroned suffering a knockout loss to Daniel Cormier. A year later, at UFC 241 Miocic evened the score and took back the belt with by fourth round knockout win. The trilogy concluded at UFC 252 with Miocic winning by unanimous decision.

The event will be a championship double header as Alexander Volkanovski defends the UFC featherweight champion against Brian “T-City” Ortega.